Melanie Myhre has been on the blog before. She’s a photographer who is known for creating striking magical realism photography. She’s been busy this year. Her work has made appearances all over the interwebs. Check out this recent review she wrote about Sigma’s 24-105mm Art lens.

I asked Melanie to share what goes into her magical realism photography. I suggested that she talk about an example of her magical realism photography from conception to completion. This is a huge and outrageous request, mind you. It takes serious dedication for artists to translate thoughts and theories into written words. Melanie accepted the challenge and outlined everything in the article below. Melanie, you’re the best! 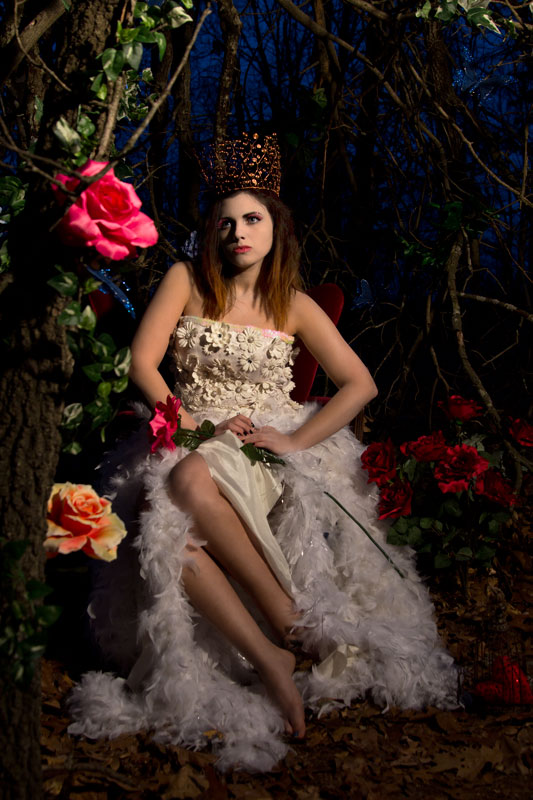 Tread softly in the Moonrose Garden, for its beauty comes with a price.

The concept started with the idea of one’s heart being trapped in a cage. You can see it at the bottom right of the image, almost forgotten. It symbolizes how it’s easy to forget one’s dreams in this world. There are so many things that discourage us and cause us to lose faith in ourselves. The roses symbolize our modern American dream based on consumerism.

We are taught that we have to have all these pretty new things. We often have to work at a job we hate just to afford ‘the stuff.’ In the rush for success, we lose sight of the things that matter most to us. We forget that our lives are richer if we follow our dreams. This was true for me and photography, so this shot means a lot to me. Photography is my passion, but I have always felt that I need to do something else to bring home the bacon. When I pared down my bills, I could make a modest living off my art and live a happier life. I don’t drive a brand new car or have cable TV, but I’m enjoying my life more than ever. Now I wonder why I felt that all the extra stuff would make me happy.

I posed her arms with her elbows out to create some negative space. This implied triangles which adds interest. Uneven shoulders offset her seated position which accentuates her neckline. This also conveys a sense of dissatisfaction. It’s kind of a fashion pose that I learned from Lindsay Adler.

I would have liked to have both feet show, I think it would have strengthened the composition. The model has a tattoo on the top of her foot that I meant to hide. I thought it would be a challenge to remove, so I had her tuck it under the dress. Looking back, I should have shown both feet and not been intimidated by the extra work.

I shot dark on purpose to give the feeling of mystery. The model’ head is tilted away from the heart implying her dissociation from it. The tree branches and rose stems create diagonal lines, which suggest instability or change. Roses need sunlight to bloom, so that’s another strange, mysterious attribute to the image’s eerie magical feel.

The crown represents entitlement similar to the fancy dress. The white is used as a symbol of purity. White also photographs well. The butterflies symbolize the subtle metamorphosis beginning in her subconscious. The bare branches and dried leaves among blooming flowers suggests a fading of the old paradigm. It is a ‘knowing’ within, a quiet voice that guides us if we listen. 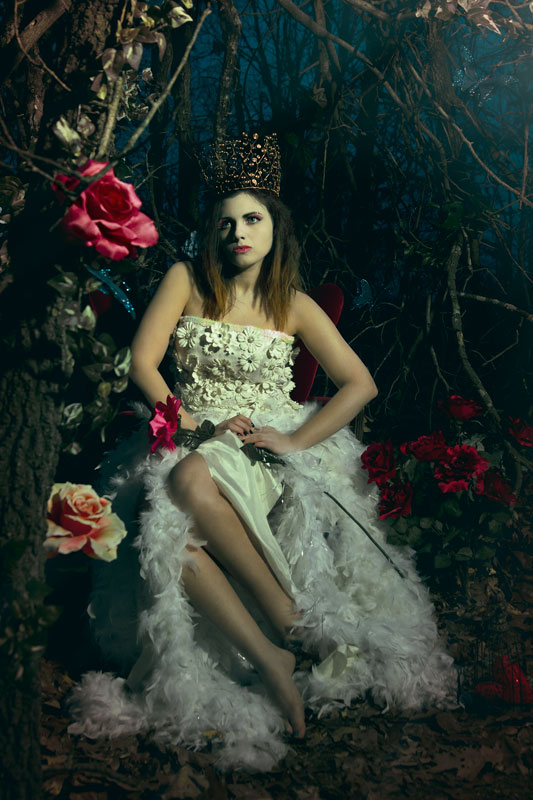 It was shot at f 4.0 at 1/80 , ISO 320 , with a focal length of 24mm. We used a single light set up high about 45 degrees–loose Rembrandt lighting. Used a Sigma 24-105 HSM art lens on a crop sensor camera. No other modifiers were used. I like to keep things as simple as possible.

We shot on a spring evening with clear skies. The best color showed up at about 7:30 PM giving us a beautiful deep blue backdrop.

We tried to implement some smoke in the image with a smoke emitter, but something went wrong. It blew up and sent little flaming plastic fragments all the forest floor which was covered in dried leaves. Luckily we were able to extinguish all the little fires before they spread, but I now advise that you always keep a fire extinguisher handy.

It’s always a bit chaotic putting together a shoot like this. When there is a lot of time and money invested in preparation for just a few shots, the stakes are high. No matter how organized you think you are, things rarely go as planned. The model showed up late, putting us behind schedule. We planned to involve a wolf in the shoot, but that didn’t come together. Maintaining flexibility is important. If we let ourselves get upset or tense it would have spoiled the mood for the whole shoot. In my opinion, shoots go best when you share plenty of laughs. Do yourself a favor and keep it upbeat and lively.

I had a few people help out with this shoot. Having a team always helps get the job done. Whenever possible, have a team. The model’s boyfriend helped carry things, and there were two young, precocious models and their parents. The parents acted as liaisons to translate complex concepts to the girls, although they made us laugh with their dry humor. I had another friend present to record video of the shoot. It was the first time I had worked with any of these people, but we hit it off remarkably well. 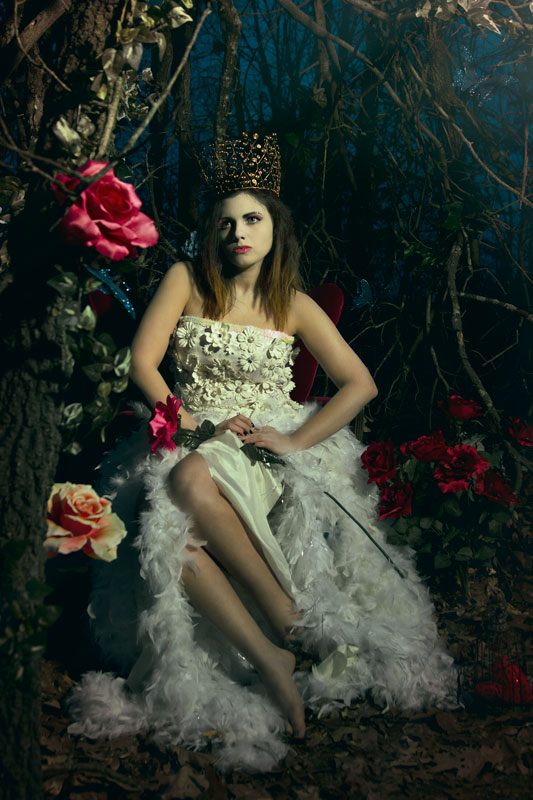 There was some general retouching done to the skin. I brightened up a couple of areas with curves and a mask. There was a little cloning performed on a gap in the feathers of her dress, but that was about it. Mostly little stuff.

I used several layers of color toning with Exposure. Then I used masks to specify the effects, for example I used a Polachrome–Faded preset, and masked out the effect from her skin. I like what the Polaroid–Creamy Blown Highlights preset does to skin, so I used layers from Exposure along with masking to adjust those areas.

I used the Ecktachrome preset with a sun flare to reinforce the haziness of the shot. This also helped offset the dark sky.

After the color was just right, I dodged and burned on a grey layer set to overlay strengthen highlights and deepen shadows. This gave it a painterly look. I just strengthened existing shadows and highlights to add extra depth like you’d see in a painting. The final is below. 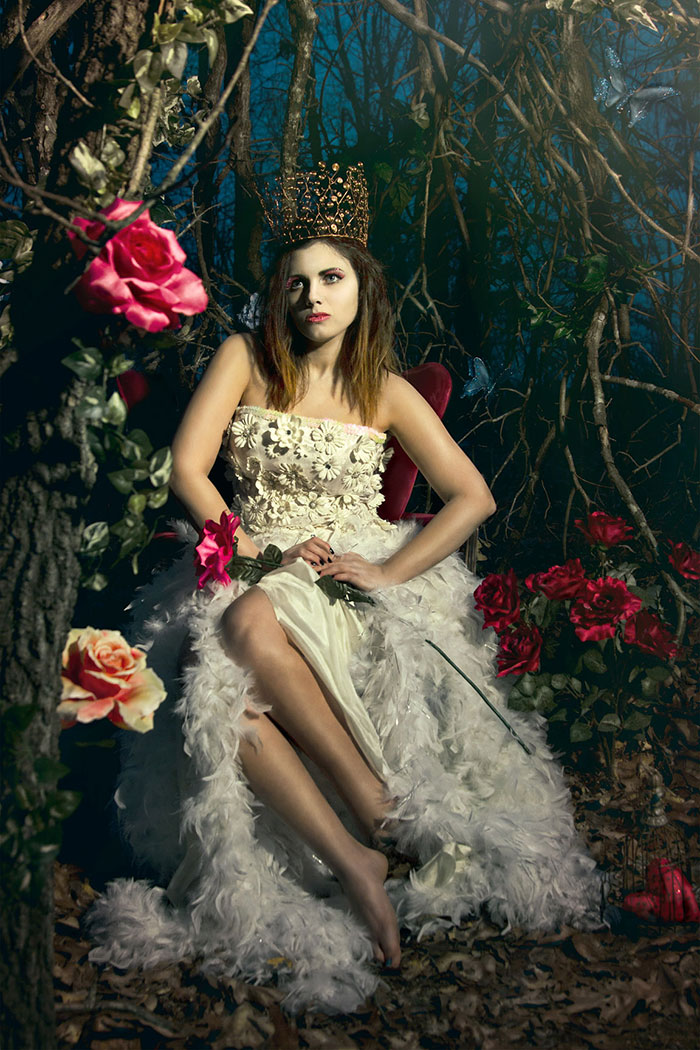 Melanie is hosting an intense one-day, hands-on magical realism photography workshop where she covers lighting, posing, editing, and more. Melanie promises that you will leave with finished portfolio worthy images. She talks all about working with models, dealing with stylized wardrobe, make-up, and hair, and reserves time for every attendee to get one-on-one time working with the model. Interested? Below are some details. Click on the image to go to her website for the rest of the scoop.