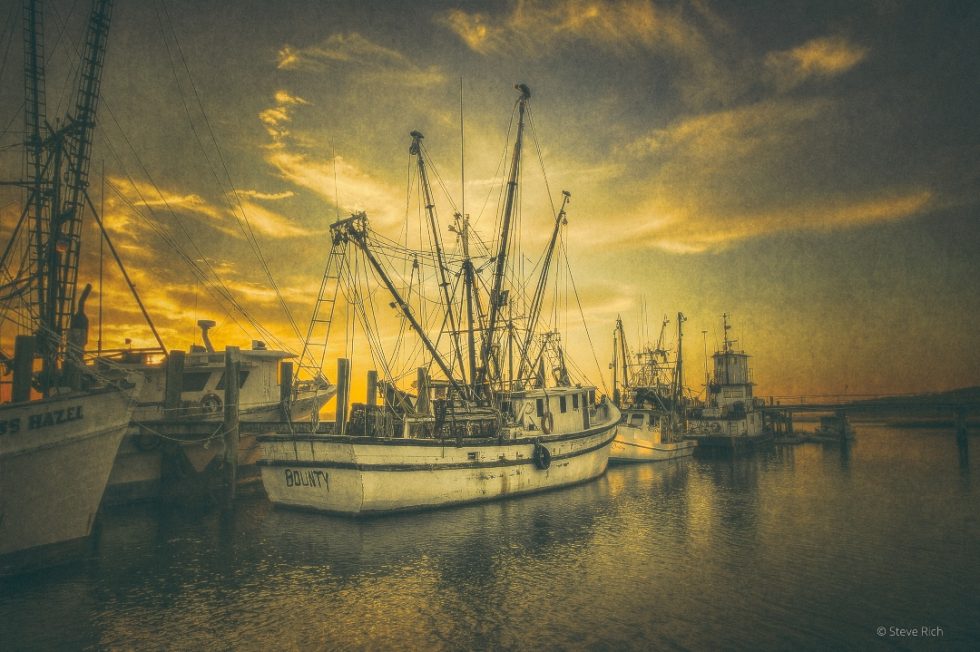 Sometimes I can’t believe how much of a change you can make to your images using Exposure. It’s always fun to artistically play with new options and discover what you can create. I love Exposure’s huge library of presets, and its layers functionality. Those two features enable me to easily make textured, painterly looks that take my images to a whole new level. In the article below, I’ll show you how I made a colorful, vintage look with a painting-like qualities with Exposure.

On a photography road trip to Port Royal, South Carolina, my goal was to capture a great shot of shrimp boats. I ended up in a really great spot on a dock when the light was just right. I prefer to shoot with a tripod, but I ran out of time before the sun began to set. When I discovered HDR photography, I immediately fell in love, so most of my work is taken in bracketed exposures to increase the dynamic range in my photos.

Shooting bracketed photos handheld is not an ideal scenario. The frames won’t line up exactly right, which can cause ghosting artifacts in the merged image. It’s easy to spot ghosting in cloud formations, because they can easily morph and change from moment to moment between frames. For photographers who use exposure bracketing, it’s common to bracket between three to ten photos for a single image using a tripod. 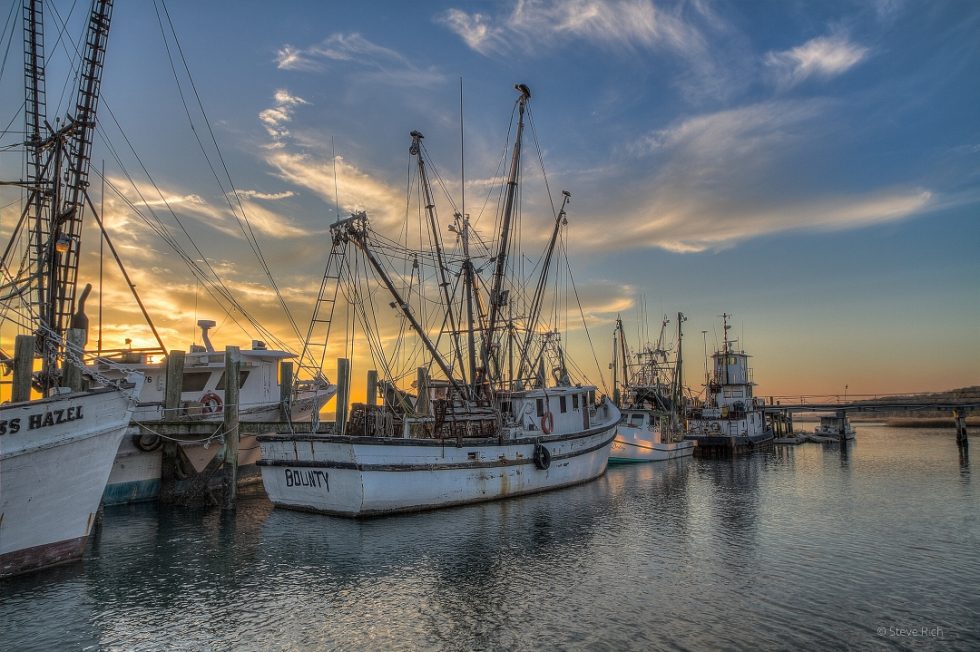 Opening the image in Exposure is when the magic really started happening. One thing I love about Exposure is its huge library of useful presets. There are many great options that I can quickly develop a unique creative effect by blending several of them. I can customize any of the presets for the photo I’m working with, or I can just use them as they are and adjust the layer opacity. It’s very flexible, so I hardly ever write down the steps I took to create a certain look. Remaking a look in Exposure is easy. And usually I discover a better way to build a look the second time through.

For this shrimp boat photo, I wanted to add some dense texture to give it painting-like depth. So my first steps in post-processing were made to build-up layers of texture. Both of the overlays I used were set to Multiply mode, which darkened the photo a little bit. I used Exposure’s protect location tool for both of the textures to keep them off of the boat in the center. I raised the black point on the Tone Curve panel, added contrast, and I brightened the midtones and highlights. At this point, the texture is easily noticeable near the edges of the photo, and it organically fades out toward the middle of the shot. 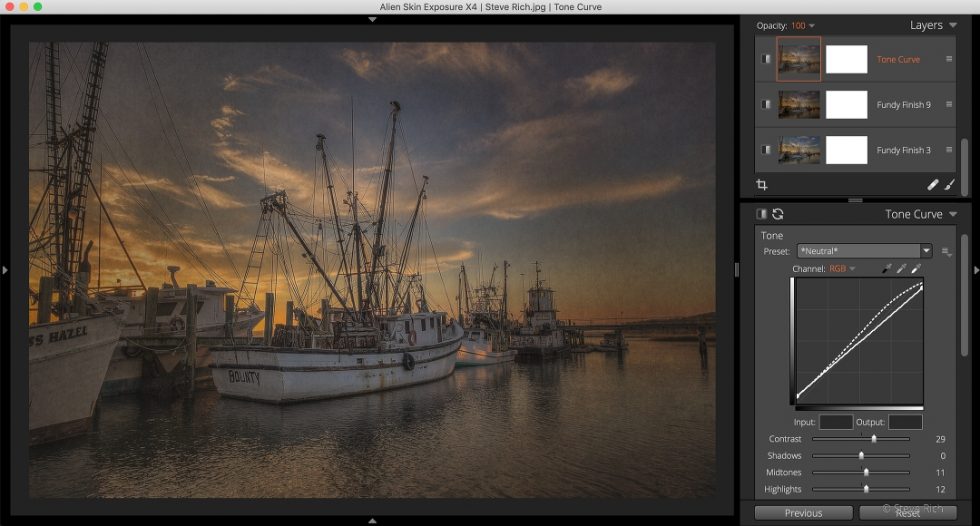 Raising the black point value on the Tone Curve can give images a vintage fade, or matte look where black values appear grey.

Next, I focused on the color tones in the photo. One of my favorite presets, and one I just can’t seem to go without, is Color Films Aged – Agfacolor Neu. I love the bright turquoise coloring and gentle grain it adds to my work. The tones that preset introduced are cool, so I also added a warming preset, Color Films Aged – Color Photo, to compliment the cooler tones with a warm, rich yellow-brown. This preset also introduces a subtle blurring effect, and a vignette, which gives the shot a vintage feel. Additionally, the Color Mist Effects – Golden Hour – Orange preset was added to warm up the deep shadows in the foreground. The shot has gorgeous color contrast and saturation in the sky at this stage. 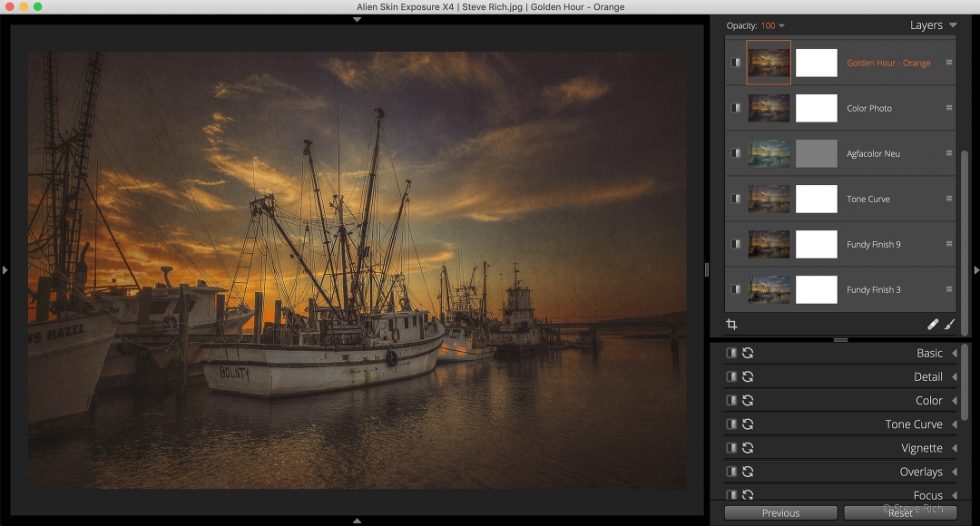 Next, I wanted to brighten the image and focus the viewer’s attention on the boat in the middle. I added the Bright – Gold preset to brighten the image and add more warming in the sky. Next, I applied the Color Misc Effects – Noon Day Sun preset, which further brightened the image, reduced the saturation in a some tones, and added clarity. This gave the boat a lot of presence in the shot, but almost too much in areas. The rigging lines looked almost too sharp. I applied the Glamour Glow – Low preset to subtly smooth the texture in the photo, reduce the over-sharp edges, and blend the shot together. And then I added my favorite Agfacolor Neu preset, again. 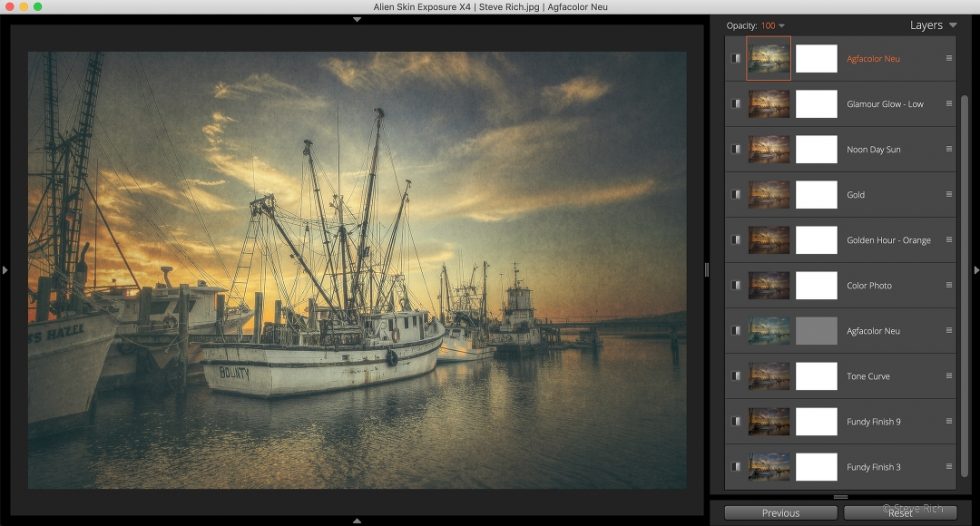 Exposure’s flexible presets work great on their own, they are easily customizable, and they can be combined with other presets to achieve a unique effect.

At the end of my workflow is when I make adjustments to the controls on the Basic panel in Exposure. I let the presets do the bulk of the work, so at this point, I make small adjustments to darken the highlights, raise the whites, lower the contrast, etc. For this shot, I also added the Creamy Highlights/Cyan Shadows split toning preset and adjusted the coloring.

I just love what Exposure is doing to these shrimp boats. Exploring the creative options Exposure’s presets offer is always an enjoyable process for me. I used Lightroom for a long time, but I am using Exposure in lieu of Lightroom now. It’s totally refreshing to use Exposure. Its editing tools are easy to use, the presets are gorgeous, and it’s lightning fast. This is why Exposure plays such an important role in my editing workflow.

For those of you interested in the Exposure X4 preset I created for this shot. Simply click on this link to download the file. After it downloads, double-click on the file to unzip. And double-click on the preset file with the .f1s extension. That will install it into Exposure. It will not work with earlier versions of Exposure, only Exposure X4.

About the Author: Steve Rich

Steve Rich is a hobbyist photographer who loves taking photos and sharing with people. He’s a huge Exposure fan. You can follow him on Facebook.