This year marks the 25th anniversary of Alien Skin Software! A big milestone like that is an opportunity to look back on our history. We thought you might enjoy hearing the story of how we got where we are today.

Alien Skin’s founder, Jeff Butterworth, dropped out of computer science graduate school because he was interested in creating finished software products that helped people with real work. He noticed people struggling to use Adobe Photoshop. In those days it lacked many useful features people take for granted today. Jeff created Eye Candy, one of the first commercial Photoshop plug-ins, to replace long recipes for special effects. 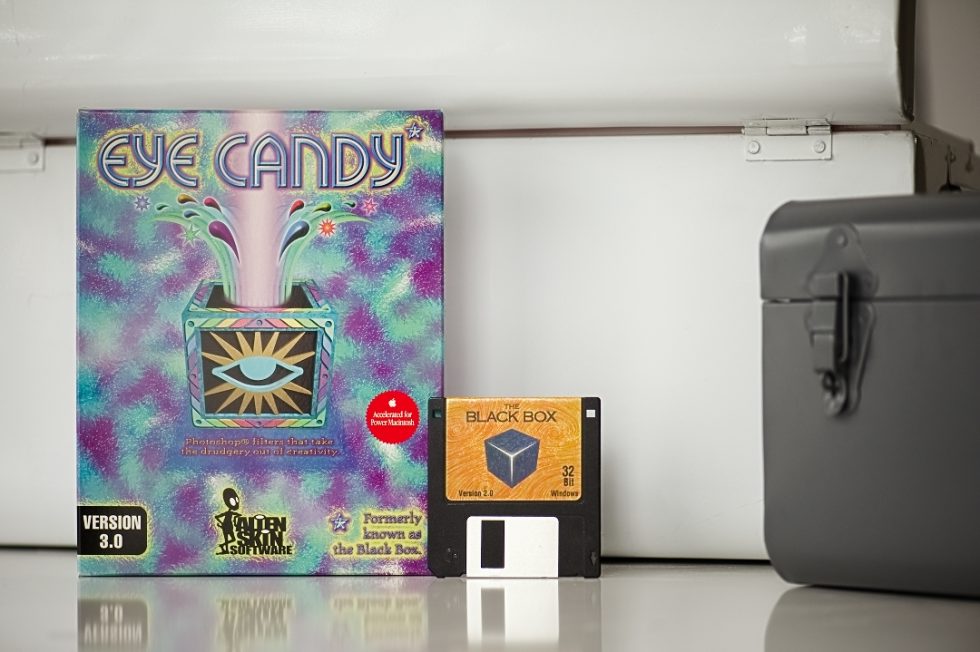 The early days at Alien Skin were a typical garage startup story. Jeff started with no money. His family thought he was crazy for dropping out of school, and wouldn’t invest in the business. He worked out of his apartment, using his roommate’s computer during the day to write the software. He wore a lot of hats – programming, taking orders, shipping packages, duplicating floppy disks, assembling manuals, and designing ads. His roommate’s cat would occasionally barf on invoices.

At first, Jeff didn’t know anything about running a business or making commercial software. He learned by talking to experienced people. He was surprised by how generous people were with their knowledge if you simply ask and listen carefully. He learned how to do press relations by talking to reporters. Even many competitors were happy to share their knowledge. We have always devoted real humans to tech support so we could learn from our customers. Our best product ideas came from customer suggestions.

The Transition to Digital Photography

In 2003, we had several conversations with customers who asked for a plug-in that would recreate the look of film. At first we wondered why people needed it, but after studying a lot of film photos, we learned that film selection was a creative choice that had a lot of impact on the look of a photo. We hadn’t seen these styles in digital photography and were inspired to bring them to modern workflows. This was the beginning of Exposure, which we created with the help of a lot of helpful photographers.

Since I took over leadership of the company in 2013, Exposure has grown into our biggest product and is our main focus today. Over its lifetime, it has grown into a full-fledged raw editing solution, but its film emulation engine lives on at the core of the product. We’re continuing to listen to our customers as we add new features, and are committed to making Exposure the best photo editor available.

Many thanks to our loyal customers for taking this journey with us. We are looking forward to the next 25 years!