I’d like to introduce Jim Tannock, a commercial photographer from New Zealand. I asked Jim to share the story behind a long-term photography project he recently completed. The rest of this article is from him.

I reside in Blenheim, New Zealand, home to the Classic Fighters airshow and the Omaka Aviation Heritage Centre. Aviation is a significant part of our cultural heritage. Inspired by the 2011 Classic Fighters airshow, I brainstormed ideas for my own photo project. I thought to humorously re-write local history in a tongue-in-cheek manner through a series of images.

It all started with the purchase of some beautiful WWII model aircraft. It took me most of a year to build the planes. I had to learn how to use a compressor and an airbrush in order to master weathering techniques for realistic smoke, oil leaks, and grime. I wanted a guts and glory look. As a commercial photographer, I have images taken from a helicopter that would work perfectly as backgrounds for these shots.

My assistant and I cast our pin-up models, designed and made the costumes, and photographed everyone against a backdrop. The model planes were hung with fishing line and shot in my studio. Before shooting the planes, I would first decide which aerial landscape to use. This showed me what lighting conditions to replicate in the studio.

Once I had all the raw ingredients captured and processed, the fun could begin!

Getting the planes onto the background was a difficult task. The hue, saturation, tonal curve, grain, and noise had to match before the aircraft was “in” the image rather than “on” the image.

Bokeh was used on the planes to soften the wing tips. This was just to guide the eye rather than give the impression of depth of field.

Next, I used Snap Art with an effect like Oil or Impasto. The paint effects were highly customized for each application. Each photo was finished off with Exposure for some extra depth and character.

The prints were hung in antique gold gilt frames that I found at yard sales and second-hand shops. Some of them were pretty beaten-up, but it added to the sense of legacy.

The images went on exhibit at a local gallery with some fictional captions. According to the exhibit, a small band of disgruntled German armed forces flew to Marlborough, New Zealand in 1941 before attacking the local airbase. All of which, of course, is utter nonsense. It was a fun project nonetheless.

Thanks for sharing, Jim!

Below are a few of the images from Jim’s shoot. Check out his website for more. You can click on the images for a larger view. The captions are fictional. 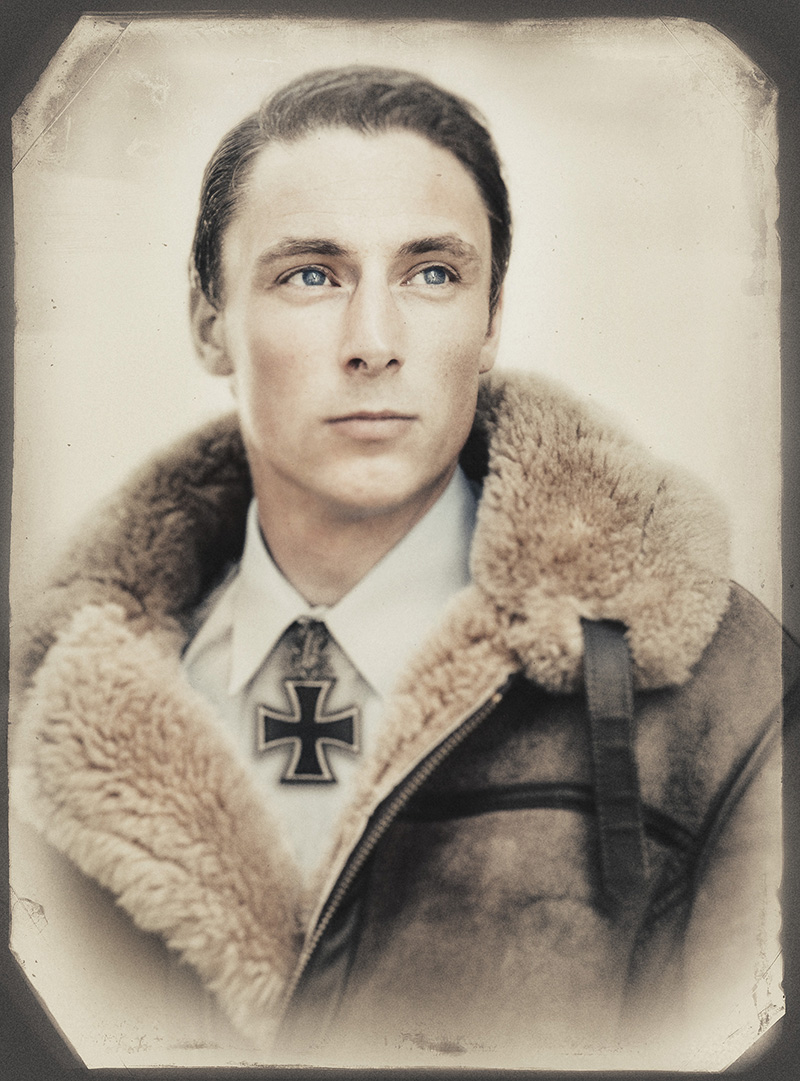 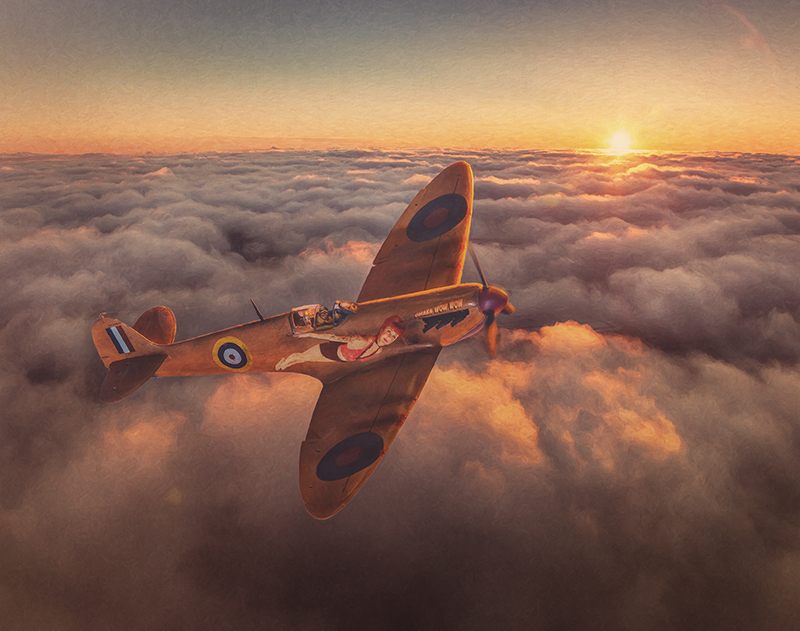 An early Spitfire Mk 1 still painted in Supermarine factory colours that became affectionately
known as Omaka Wow Wow. Flying Officer Fenton Trescothick wanted his fiancee Hillary Dawn of Wairau Valley to join him over the skies of Marlborough so he painted her on the side of his aircraft. Miss Dawn was always a popular figure at
local dances. 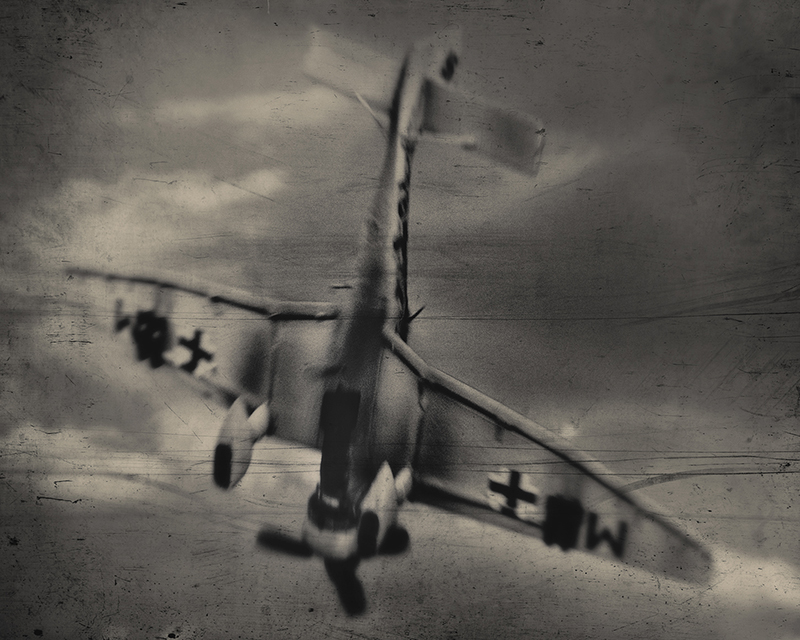 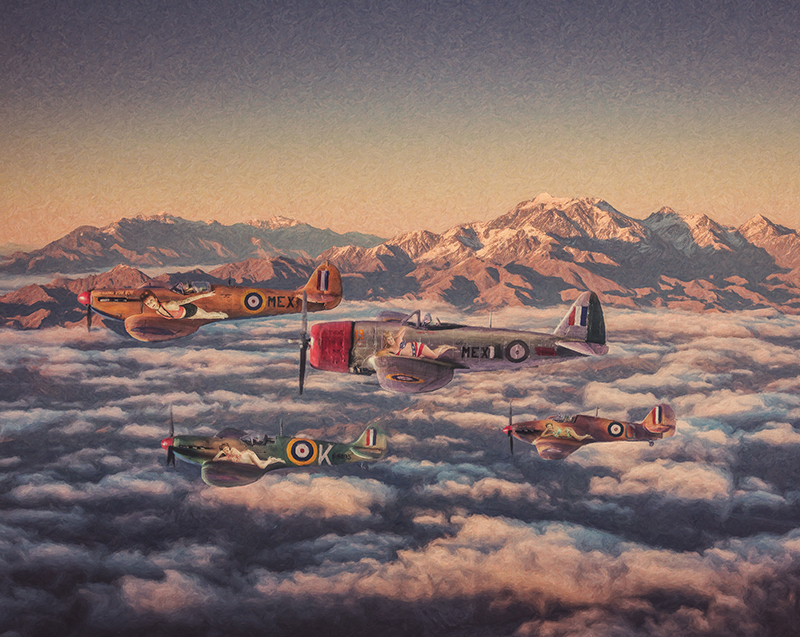 Basking in the glory of victory after the defeat of the Geradezugverschluss group the pilots known as the No 8’s flew a victory lap of the South Island. Unfortunately the flight over the Richmond Ranges into Nelson was cancelled due to heavy
cloud cover and lack of visibility.