Why You Should Bring Your Telephoto Lens when you Shoot Landscapes

When most people think about shooting landscapes, they immediately think, “wide angle”. It seems natural that the “big picture” requires as wide a view as possible. But today’s article discusses telephoto landscape work – why you should bring your favorite telephoto along the next time you go to shoot landscapes.

I know, I know. This is a software blog. But having great software to tone and process your images is kind of pointless if you don’t have some great images to start with. Learning good photography technique is going to help you bring your best into Exposure to ramp up through processing.  Most all of the photos in this articles have processed through some of Exposure’s “Slide” presets at varying capacities.  Slide presets add a lot of visual punch to landscapes and help to bring the best out of your photos.

Some of the best shots of the day are missed because photographers aren’t using the right tools for the job. There are times when a wide angle lens is the right tool for the job, but often it isn’t, and the telephoto landscape approach is a better way to go. Here’s why. Take a look at these two photos: which one shows off the beauty of the scene more? 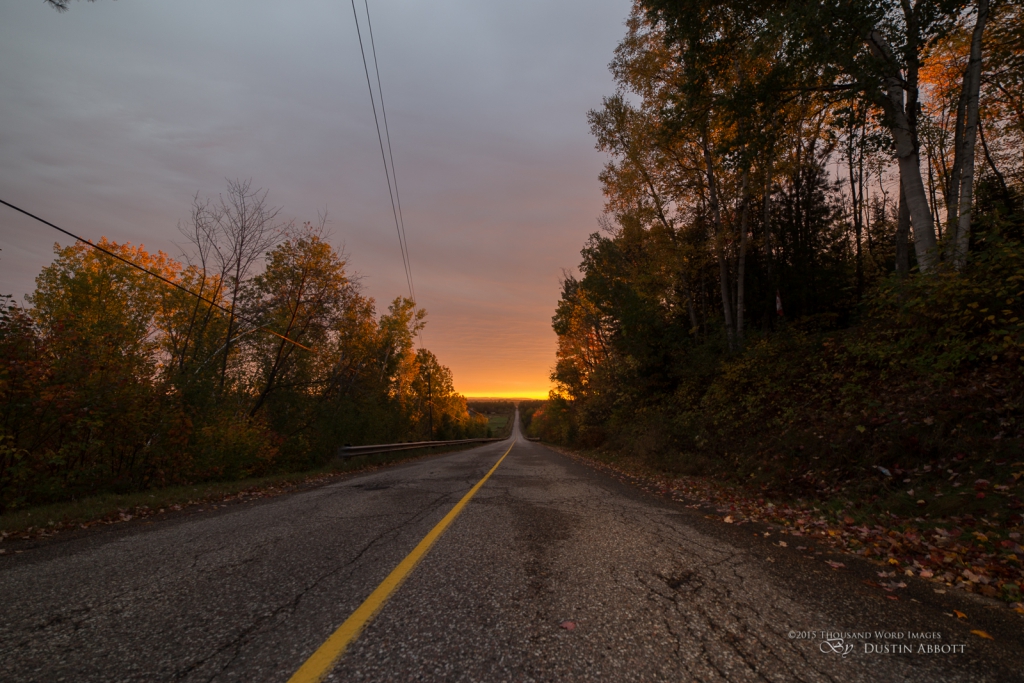 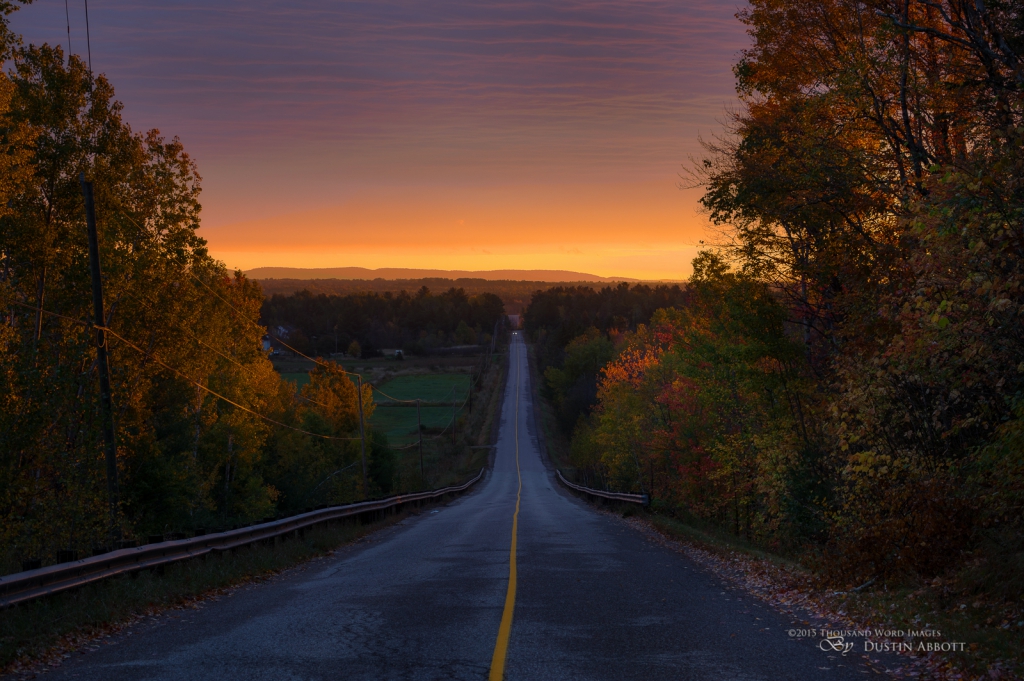 Wide angle lens are valued by people who shoot architectural images because they create the illusion of space. A wide angle lens can make that tiny bathroom look a lot bigger! We’ve all checked into a hotel room or condo that looked a LOT bigger in the photos. Wide angle lens push things away and makes elements in the photo seem further apart. This effect becomes increasingly extreme as the lens focal length becomes wider.

A telephoto lens does the opposite. It compresses a scene and can make distant elements seem closer. Resort advertisers often use this technique to make their properties seem closer to the beach than what they really are. Perhaps you’ve also had the misfortune to arrive at your “waterfront destination” (in pictures) that is, in reality, a mile away from the water. Once again this effect becomes increasingly extreme as the focal length becomes longer.

The human eye’s “focal length” roughly corresponds to about 50mm, which is why a 50mm lens is often referred to as a “normal” lens. Our perception of space and depth will roughly equal what a 50mm lens on a full frame (35mm) camera would report. As you move away from that “normal” range in either direction either more or less space will be “created” by the focal length of choice.

Wide angle lenses work well in more intimate venues. Really wide focal lengths work best when you want to emphasize something in the foreground that you are almost on top of. It “stretches” the scene, emphasizing the foreground, and pushes the background further away. When used properly it will create amazing images. Here’s one of my favorite images I took using this technique and a 14mm lens. 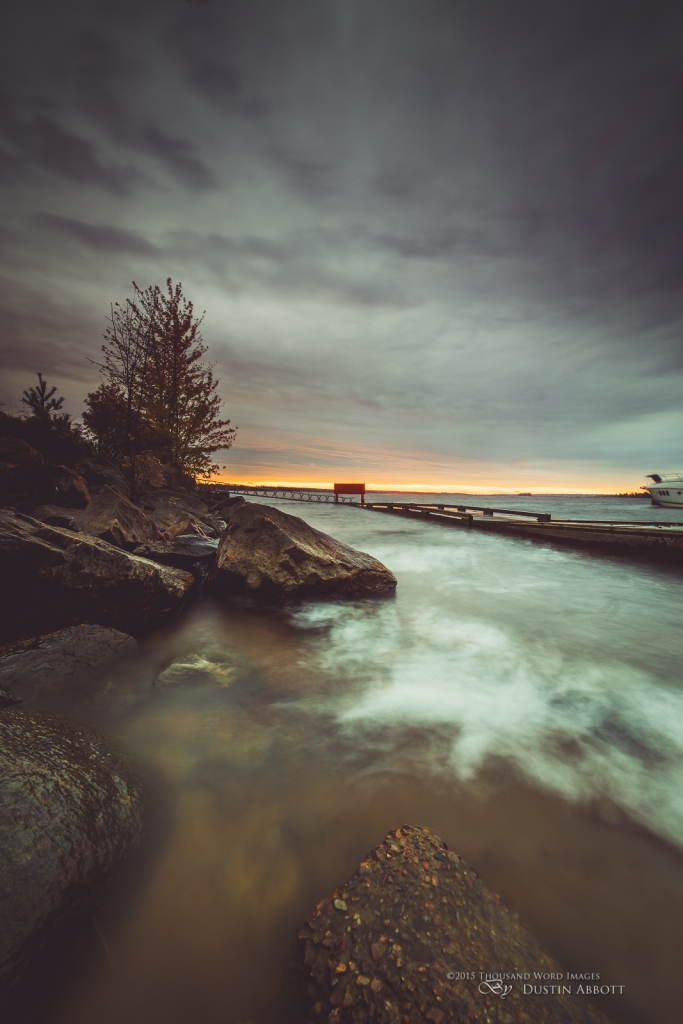 That red sign that catches your eye in the middle of the frame was only really about 25 feet from the camera…but it seems really distant because of the wide angle effect. In this venue the technique works great…I needed the space.  I added some Technicolor processing to this image in Exposure to augment the moody feel.

But this isn’t going to work nearly as well when you have a truly epic scene in front of you. Take, for example, this photo of the San Francisco Peaks in the high desert of Arizona. I got up early to some really great, warm light. In the distance wind was whipping across the snowcapped peaks of the mountain range; a great contrast to the warm light on the dried grasses of the foreground. I had one of the best wide angle lenses in the world with me, the Zeiss Distagon T* 2.8/15mm. This amazing prime lens is very expensive (about $3000) for a reason; it has amazing resolution, contrast, and color. 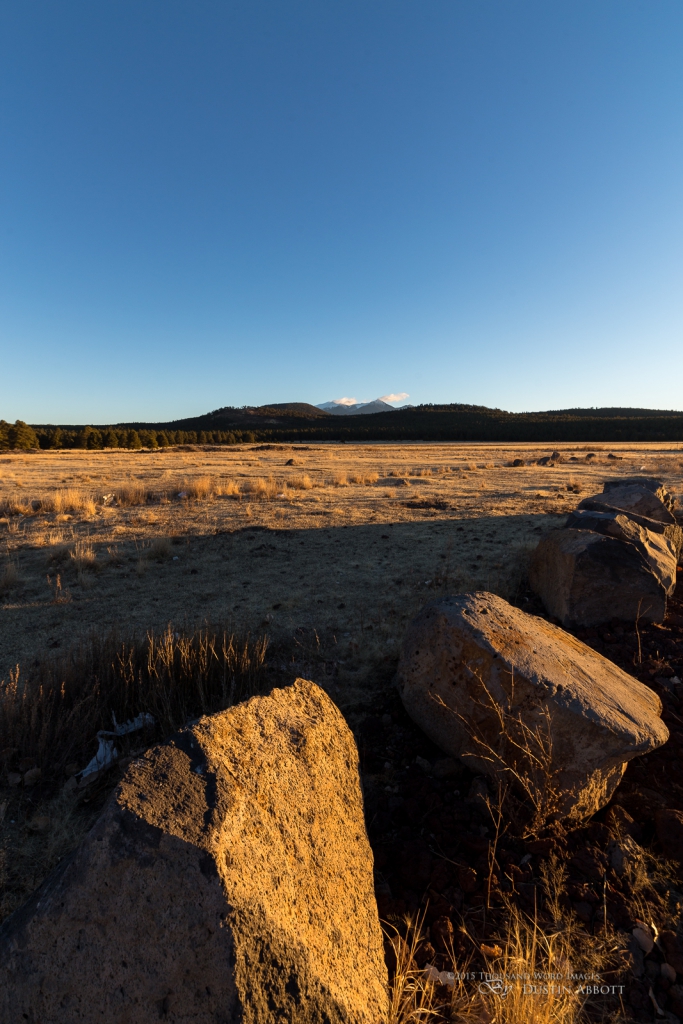 The wide focal length worked great for emphasizing rocks in the foreground in this shot, but the wide focal length also meant that the even cooler snowcapped mountain range seemed a long way away. Fortunately I also had my favorite telephoto lens for travel along with me, the Canon EF 70-300mm f/4-5.6L IS USM. I love this lens because it has a great build, amazing optics, and also is small enough to travel very easily when retracted. It was very easy to pull in those distant details by using a telephoto lens instead. This shot at 124mm shows off the very nice three distinct layers of the scene (foreground grasses, forest middle layer, and the distant mountains). 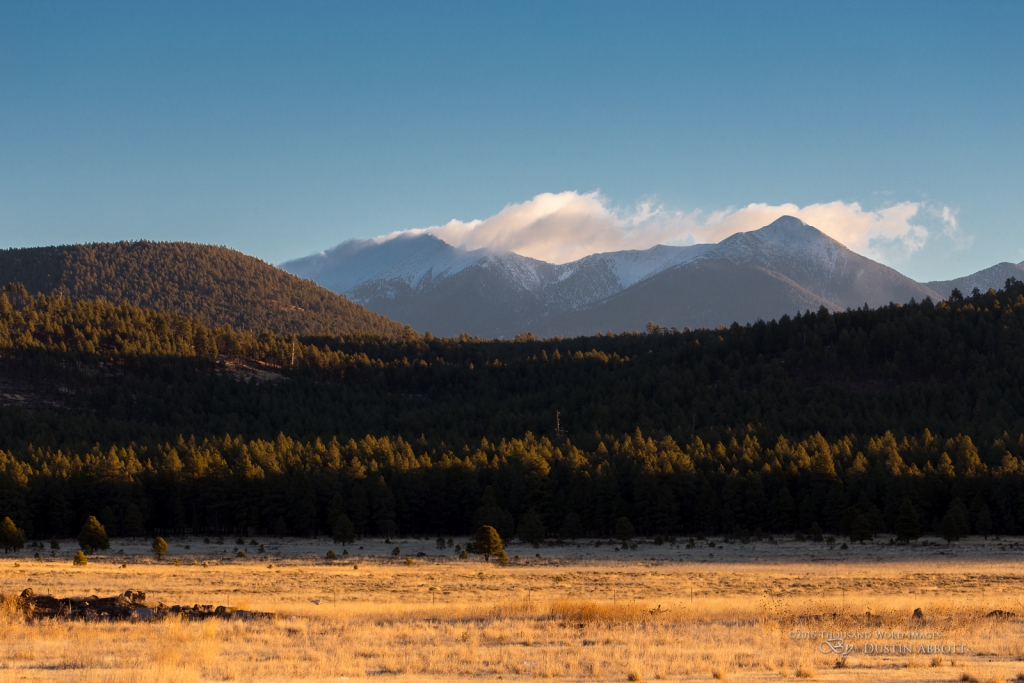 But what if I wanted to include more details, a wider scene? I simply shot three frames to combine into a panorama.

I got the same wide angle look, but the difference is that I was able to still have the “compressed” telephoto look that allowed the space between the elements (and the space from the viewer to the main subject) to be diminished.

I used a similar technique later in the day at the Grand Canyon, except this I shot four portrait oriented shots that allowed me to create a panorama with roughly the normal dimensions of a single frame but with the epic space of the Grand Canyon compressed closer to allow the viewer to see more of its detail.  Using one of the Slide presets in Exposure I mentioned earlier really helped me to pull out the reds in the Canyon. 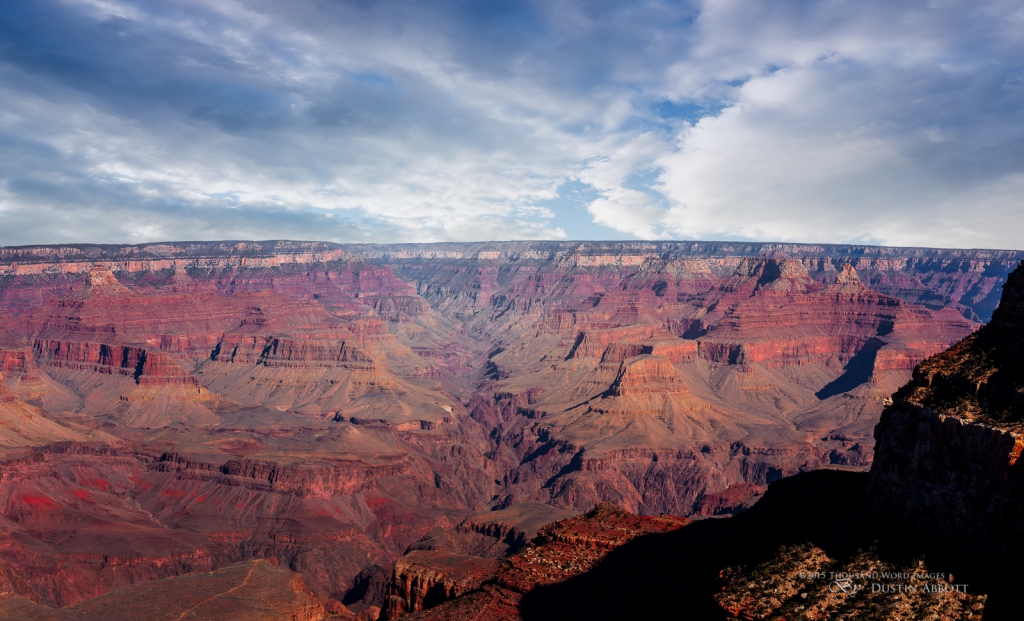 Deep shadows were hiding a lot of the foreground details during the time that I was at the Canyon, so a wide angle lens didn’t work as well. But even if the light was perfect, the telephoto lens would have worked better simply because of the immense scale of the Grand Canyon. You don’t need the illusion of MORE space shooting there; you need less. The same is often true in less “grand” locations. And sometimes, like those resort marketers, it is desirable to “pull” distant attractions closer. I did that with the distant U.S. Capital building when I framed it under this tree that was, in reality, a long distance from the building. 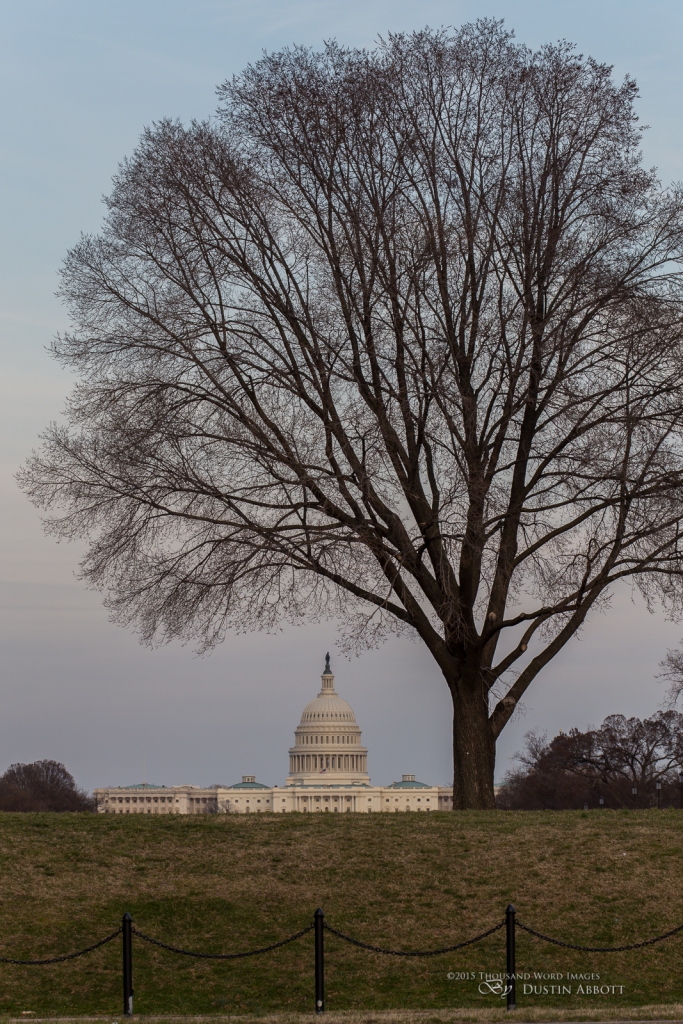 The next time you go out to shoot landscape images, be sure to bring your favorite telephoto along. Telephoto landscape work can yield great great results. You may just take your best landscape image of the day with your telephoto lens…and better images make for better processing when you throw that file into Exposure!

About the Author: Dustin Abbott

Dustin Abbott is a professional photographer and lens reviewer along with being a published author and Pentecostal Pastor. He is married to Lana and father to Samuel, Jazzlyn, and Ryan. He is blessed to live a rich and varied life.